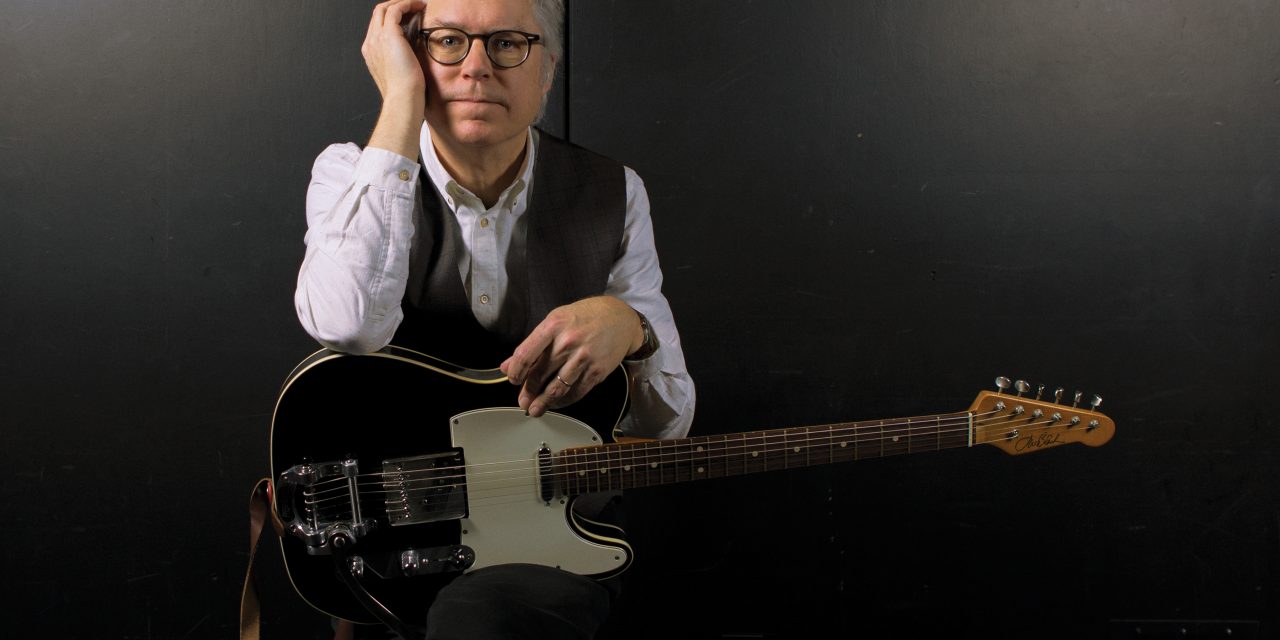 This feature I wrote recently for the Irish Times – in advance of the Bill Frisell Trio’s appearance at the National Concert Hall in Dublin in February 2019 – provides a pretty good introduction to Frisell and his music.

Bill Frisell: The ‘favourite guitarist of many people who agree on little else’

There is a famous story about the great Irish jazz guitarist Louis Stewart, who died in 2016. A modest man whose deadpan sense of humour was as sharp and spontaneous as his world-class playing, he was asked towards the end of his life whether he wanted to be buried or cremated. Stewart thought for a moment, and then replied, “Surprise me.”

It’s an anecdote that another mild-mannered yet peerless guitarist, the gentle American iconoclast Bill Frisell – who plays his most high-profile Irish concert later this month at the National Concert Hall – would no doubt fully appreciate. He is a musician who has unceasingly sought to challenge and surprise both himself and his audience, and to be constantly stretched and surprised by the musical company that he keeps.

Over a period of 40 years, almost as many albums as leader, and appearances on more than 300 recordings, Frisell has established himself as one of the most important, pioneering and panoramic musicians at work today.

Widely revered and celebrated, Frisell has been lauded in the Wall Street Journal as “the most innovative and influential jazz guitarist of the past 25 years”. He has been called “the musing poet of the jazz guitar” and “the most distinctive stylist in contemporary jazz”.

There is little doubt that 67-year-old Frisell is a sensitive and consummate jazz player, composer and improviser. He has topped jazz charts and polls – influential American jazz magazine DownBeat has awarded him “Best Guitarist” no fewer than 15 times in its annual critics poll – and worked with many jazz greats.

“I’m actually fine with being described as ‘a jazz guitarist’, and I respect that, and there’s certainly plenty to do within that form,” says Frisell.

“It’s just that when I think about some of the people who’ve inspired me – Thelonious Monk, Sonny Rollins and Miles Davis – for me, jazz is not so much a style as a way of thinking, a process of transforming what’s around you. What bothers me is when the word is used to describe some music that excludes something else; it’s like there are these rules that keep people apart. I’m just trying not to shut anything out.

Frisell’s admirably adventurous approach to music is a major part of his wider appeal, and his reach and dedicated following stretch far beyond the freeform yet sometimes introspective borders of jazz into a musical world shaped and inspired by a vast range of forms – from bluegrass to pop, Americana to avant-garde, blues to West African, folk to film music, ambient to alt-rock, country to classical.By naturally bringing in and blending all these many styles and interests and more into his playing, Frisell has changed the sound of jazz, the sound of the guitar, and even the sound of American music.

The process has worked vice-versa too in the jazz-tinged flamenco of Paco de Lucia; the Latin rock of Carlos Santana; the later albums of “country gentleman” Chet Atkins; the extended solos of the Grateful Dead’s Jerry Garcia; Jimi Hendrix.But no one before Bill Frisell has so successfully and seamlessly synthesised so many of these disparate musical components into one highly individual sound.

By creating music that is free-moving yet deep-rooted, Frisell has forged something entirely distinctive and of itself, a sound that, even after one note, is unmistakably his and his alone. And by steadfastly following his own path, Frisell has become the most unlikely of guitar heroes, an unexpected agent of change who has inspired others to expand their view of what jazz and music can be.

“I’m just trying to use what I know and put my own experience into what I’m doing without limiting anything,” Frisell told Guitar Player magazine. “For me, music has always been this world where anything is possible.”

Frisell’s music reaches out, like an open hand. It embraces, and it renders the idea of category or classification in music, however useful as a shorthand or a handle, redundant. Genre becomes the least interesting and meaningful way of thinking about his compellingly complex and composite music.

“People call him a jazz guy, but that’s too easy I think, too limiting,” says post-punk polymath Gavin Friday; Frisell played on Friday’s debut solo album in 1989. “He has this great eclectic ambience, an essence almost, that merges into anything from blues to jazz to country to acoustic.”

Acclaimed for similarly creating a new sound that both respects a tradition and thrillingly transcends it, Hayes has tempted Frisell several times to play with him in Ireland, most recently last year on the NCH main stage itself.

Growing up in Denver in the 1960s, Frisell soaked up everything from surf music to English rock, classic soul to Chicago blues, the Beatles to Frank Zappa. “The older I get, the more I keep looking back trying to figure out where I come from, and why,” he says. “And the more I look back, the more information it gives me to move forward.”

Frisell is a shy, reserved, contradictory, gentle giant of a man. His 6’1” frame and bespectacled face led Gene Santoro in Spin magazine to dub him “the Clark Kent of the electric guitar”. “Soft-spoken and self-effacing in conversation, he apparently breathes in lungfuls of raw fire when he straps on his guitar,” wrote Santoro.

Add a spare yet evocative technique that values space and structure as much as a multitude of sound; a playful and irreverent slant – though never to the point of parody or pastiche; audio-visual projects that have seen Frisell compose scores to the films of Buster Keaton and the paintings of Gerhard Richter; and a very musical approach to the opportunities afforded by an array of pedals and effects that produce an infinite soundscape of loops, delays, reverbs and distortions – and the layers of meaning and possibility in his music become even greater. 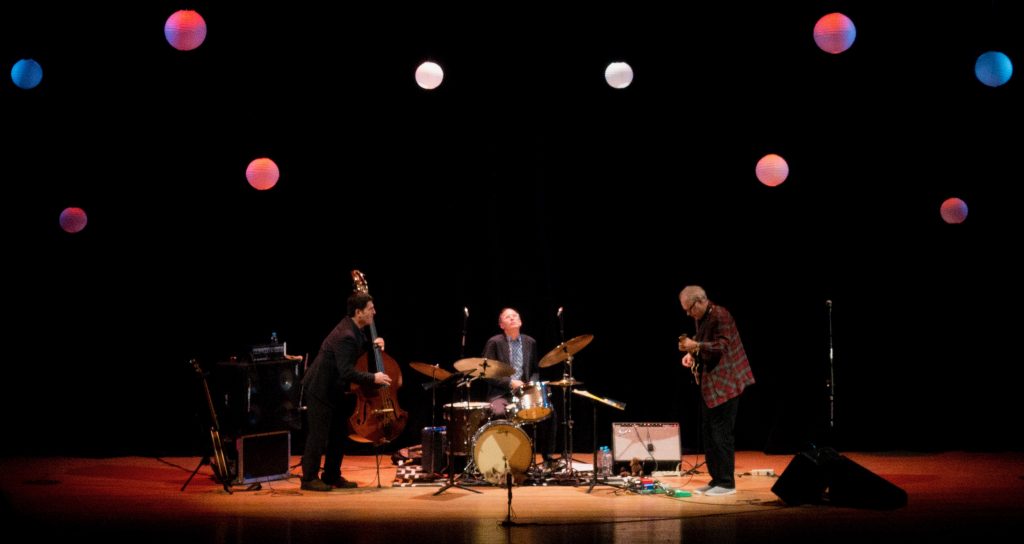 None more so than when Frisell plays live, which is often the best way to experience his versatility and pluralism, his widescreen approach to music. While Frisell is not a natural showman or performer – he is as much a listener as a player, more a collaborator than a frontman, and he rarely announces songs – he always stays in service of the music and the musicians with whom he is appearing.

“All the people I’ve had success playing with have an openness and a sense of joy in the music itself,” he says. “There’s no competition going on; nobody’s trying to show the other what they know. I’m trying to get a conversation going in the music.”

That conversation at the NCH will be three-way – in an agile trio with bass player Tony Scherr and drummer Kenny Wollesen, two musicians Frisell has worked with for 20 years or more, who have featured in many of his myriad groups, and who have the strikingly protean ability to take the music in any direction, at any time, to create something greater than Frisell intended.

For all this, Frisell’s music remains inseparable from, and unified by, his love of a good melody, most especially when he is improvising or at his most abstract. While very little of the music played in his concerts is discussed or planned beforehand, Frisell’s repertoire flows freely from original compositions; to jazz standards, particularly those by Thelonious Monk; to songs such as Hank Williams’s “I’m So Lonesome I Could Cry”, John Barry’s “Goldfinger”, and Bob Dylan’s “Masters of War”.

Frisell treats his guitar like a voice, a singer of songs. “Music is how I express myself, how I communicate with people, much more than verbally. It’s where I really say something, where everything makes sense.”

It’s a language that has made him one of the most sought-after players in contemporary music, and won him praise from a variety of sometimes unlikely sources.

“I don’t think there’s anybody else who I could say was a bigger influence on us – by which I mean my group of friends who are all still playing music – than Bill. He’s our touchstone,” says Justin Vernon of Bon Iver. Vernon has a tattoo at the top of his back of the title of one of Frisell’s songs, “That Was Then”.

“He’s my favourite guitarist in the whole world, the best living contemporary guitar player,” says Lucinda Williams, who has worked with some great guitarists, and is no mean picker herself. “I keep thinking, ‘How am I going to make another album without Bill Frisell?’”

“He is one of America’s most unique musicians . . . one of the great American voices,” wrote Elvis Costello, who has played in duo with Frisell, as has Marianne Faithfull, who considers Frisell “a genius”: “I feel completely covered playing with him – like a full tapestry of sound has been hung behind me,” she says.

Others who have worked with and hailed Frisell include a diverse group that stretches from Paul Simon to Gus Van Sant; surrealist cartoonist/animator Jim Woodring to maverick songwriter/arranger Van Dyke Parks; renegade jazz trio The Bad Plus to restless experimentalist John Zorn; and “free-folk” innovator Sam Amidon to leading contemporary composer Gavin Bryars.

It can seem as if there is hardly anyone who knows about music who doesn’t love Bill Frisell. He is, to quote saxophonist Paul Desmond’s encomium to Jim Hall (a major influence on both Frisell and Louis Stewart), “the favourite guitarist of many people who agree on little else in music”.

Everybody digs Bill Frisell. The concert at the NCH should reveal part of the story of why. And why, perhaps, you need to, too.

A link to the article is here. Bill Frisell’s website is here.